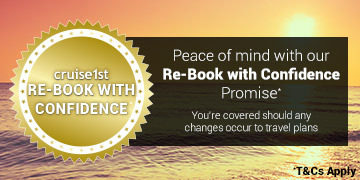 Spain is a beautiful country with a rich and colourful history and a place of varied regions. The Spanish are proud and welcoming people. For many first-time visitors to Spain, the expectations are images of sangria, sombreros and bullfights, but there is much more that makes modern Spain very cosmopolitan.

A Taste of Cruises to Spain

7nt - Western Mediterranean from Barcelona
Allure of the Seas, 8th May 22, 7 nights

Cruise Aboard One Of The Largest Ships At Sea , Extend your stay in Barcelona
from only
£799pp
More Info

Spain’s fabulous beaches are its main attraction to holiday makers of all ages. The Spanish sun is out virtually any time of the year in the Southern areas, making the life style more of a slower relaxing pace. However, Spanish people know how to party, with festivals taking place in most towns and cities throughout the year! The Running of The Bulls in Pamplona is probably the most famous festival in Spain where brave volunteers run ahead of charging bulls through the cobbled narrow streets of San Fermin.

The two most exciting cities are Madrid and Barcelona. Madrid, Spain’s Capital City and hosting the Spanish Royal family is not just a cultural city; it’s a lively, vibrant metropolis with clubs, cafes and discos open till the early hours! Barcelona just oozes with a Mediterranean atmosphere, with historic cobbled streets, museums, art galleries and a golden sandy beach.

As well as being a mainland, Spain also includes the Balearic & Canary Islands. The Balearics consist of Mallorca, Menorca, Ibiza and Formentura and each one has a personality of its own, and their favourable climate and wonderful beaches make them truly irresistible for holidays.

The Canary Islands are situated in the Atlantic Ocean and are made up of seven Islands: Tenerife, Lanzarote, Fuerteventura, La Gomera, La Palma, Gran Canaria and El Hierro. Tenerife being the largest of the Canaries is probably the best for sun, sea, pub and club, but it does have its side of character with ’El Tiede dormant volcano which can be viewed from almost anywhere on the Island. La Gomera is the smallest of the Islands and is best known for its ancient whistling language.

Cruises to spain vary in duration length - Take a look at our 5 day cruises.